Blue Rain (蓝雨, Lányǔ) is an eSports team that debuted during Season 1 of the Glory Professional League. It is considered one of the powerhouse teams in the league. They have a strong training camp, which some top-class players have participated like Huang Shaotian, Yu Wenzhou, Fang Rui, and most recently, Lu Hanwen. Their playstyle, since Wei Chen was around, is to create and seize opportunities.[1]

While the Alliance was still forming, Wei Chen was asked to set up a team, which became known as Blue Rain. At some point in the early times of the league, Blue Rain held a training camp, where the future prospects of Blue Rain, Yu Wenzhou, and Huang Shaotian, took part as well as Fang Rui. With Huang Shaotian being seen as the future ace-player of Blue Rain, the club began carefully raising his Blade Master account. This period of time became known as "The Beginnings of the Legends of the Sword Saint." After losing to Yu Wenzhou multiple times during a practice match, Wei Chen, the Captain at that time, made the decision to step down.[2]

Fang Shijing became the user of Swoksaar and Captain during Season 3 which allowed Yu Wenzhou and Huang Shaotian an extra season of practice. Blue Rain failed to enter the playoffs that season. Fang Shijing retired at the end of Season 3 and Yu Wenzhou was promoted to the captain of Blue Rain.

During Season 6 of the Alliance, Blue Rain beat Tiny Herb in the finals, stopping Tiny Herb from becoming the 2nd team to win back-to-back championships and becoming Champions themselves.

In Season 8, Blue Rain clinches the 1st place in Regular Season. Blue Rain performs consistently for the season by winning all 5 matches in April and the last 2 matches in May. The media notes Blue Rain as the most consistent team in the Season 8 of the Glory Pro Alliance.[3] Blue Rain enters the playoffs finals for the second time after defeating 301 Degrees and Misty Rain. They face Samsara in the finals but lose in an unprecedented fashion, causing the Alliance to change the rules for the playoffs.

Prior to the start of Season 9, one of their All-Star players, Yu Feng, transfers to Hundred Blossoms but they promote one of their youth prospects, Lu Hanwen, from the training camp. Lu Hanwen becomes the youngest player to make his debut in the Glory Professional Alliance and receives the Best Newcomer award for his performance that season. In Season 9, they finished fifth in the Regular Season and are knocked out in the Quarterfinals by Tiny Herb.

Before the start of Season 10, their Thief player Lin Feng transfers to Wind Howl. Blue Rain finishes third in Regular Season and faced Happy in the Quarterfinals where they lost. In the Quarterfinals match, they became the first team to lose a match whilst winning the Team Competition.

-* Wei Chen initially retired during the 2nd Season, but was convinced by Ye Xiu to return back to the league. He participated in the 9th season Challengers League and 10th season Pro League with Happy.

One of the powerhouse guilds backed by the team Blue Rain. The Heavenly Domain guild is run by Liang Yichun (Changing Spring) while the 10th Server guild is run by Xu Boyuan (Blue River/Blue Bridge). Due to Troubling Rain and Huang Shaotian being in Blue Rain, the guild is composed of many Blade Masters. 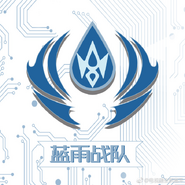 Retrieved from "https://the-kings-avatar.fandom.com/wiki/Blue_Rain?oldid=14223"
Community content is available under CC-BY-SA unless otherwise noted.