The Sword Saint is the sixth episode of Quan Zhi Gao Shou (The King's Avatar) that aired on May 5th, 2017.

In Frost Forest, after Su Mucheng performs Delivery Gun, Ye Xiu tells her not to use such professional-level techniques, as they arouse suspicion. Once she stops, Crowd Lover passes it off as a fluke, doubting why an Excellent Era member would help Tyrannical Ambition set a record. Ye Xiu sighs in relief that they fooled Crowd Lover.

As they leave the dungeon, Ye Xiu tells the team to review the plan, and then tells Tang Rou to practice in the Frost Forest. Specifically, she should focus on maximizing damage while minimizing mana consumption. Throughout many days, Steamed Bun Invasion and Tang Rou train their skills, while Ye Xiu levels up his Myriad Manifestation Umbrella. Finally, the team enters the Frost Forest and sets a record of 13:05.47. However, their record ends up being beaten by Excellent Dynasty, and Ye Xiu tells Tang Rou he has no intention of beating it again.

Liu Hao, the vice-captain of Excellent Era, is frustrated by Ye Xiu's success in the 10th Server. To get back at him, he uses an account on the 10th Server named Hateful Sword, and friend requests Lord Grim with the intention of spying. Pandering to Ye Xiu, Liu Hao asks to join his dungeon team, to which Ye Xiu responds that they are full. Since his original plan didn't work, Liu Hao asks Ye Xiu for a duel, so Ye Xiu tells him to duel with Steamed Bun Invasion instead. When Liu Hao asks Steamed Bun if they would battle in a Free or Fixed Field, he is infuriated by Steamed Bun's asking what he mean because of his lack of knowledge of the game. In the Arena, Liu Hao allows Steamed Bun to win, though after this he joins Ye Xiu team to run Boneyard.

That night, the match between Excellent Era and Blue Rain is happening. Liu Hao, who had been playing on the 10th Server all day, is performing extremely poorly against the Huang Shaotian's Blade Master, Troubling Rain. With his overwhelming ability to seize opportunities, and constant chatter, Huang Shaotian beats Liu Hao, and Blue Rain is victorious.

Liu Hao and his teammates from Excellent Era defeat the Boneyard record using Ye Xiu's strategy, and then he messages Ye Xiu after the fact, feigning ignorance. However, to his astonishment, Liu Hao finds out that Ye Xiu knew who he was the whole time.

As Tang Rou and Ye Xiu are at the front desk, she notices a suspicious figure lurking outside. The mysterious person waves at Ye Xiu and creeps in, following Ye Xiu to a deserted corner of the Internet Cafe. The person then uncovers himself, revealing Huang Shaotian, the Sword Saint and vice-captain of Blue Rain. Huang Shaotian constantly talks, asking Ye Xiu why he left the professional scene. Ye Xiu responds by telling him that he will tell him after they set the Boneyard record.

After logging into the account Flowing Tree, Huang Shaotian is astounded by the extremely fast record. When Ye Xiu almost reveals his identity, Huang Shaotian shuts him up.

Ye Xiu then shows them how they will be progressing through the dungeon—by luring and trapping enemies, including the second Boss, in a crack on the side of a cliff. Huang Shaotian realizes that Lord Grim is an Unspecialized character. He is also curious of the Myriad Manifestation Umbrella and its ability to change forms. They finish the dry run, and Ye Xiu reveals Hateful Sword's real identity to the rest of the team, though Su Mucheng already knew.

Using the help of Huang Shaotian, Ye Xiu says they can beat the record. However, Su Mucheng reminds him that even with the Sword Saint's immense capabilities, they are restrained by the low-level of the dungeon. However, Ye Xiu says that since they ran the dungeon with Liu Hao prior to this, they obtained a high-level weapon, which would help them cut time in the hands of Huang Shaotian.

The team finally joins Blue Brook Guild so that the record is under the guild's name, and prepare to set the Boneyard record. 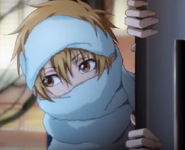 Add a photo to this gallery

Retrieved from "https://the-kings-avatar.fandom.com/wiki/Animation/Episode_6?oldid=12953"
Community content is available under CC-BY-SA unless otherwise noted.